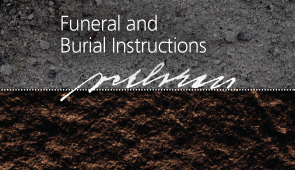 In this inquiry, the VLRC considered the extent to which a deceased person’s wishes about their funeral, burial or cremation should be legally binding. Currently, the law gives the executor or likely administrator of a deceased person’s estate the right to decide what happens to the deceased person’s body, regardless of their wishes. This is based on the old common law rule that ‘there can be no property in a dead body‘.

In November 2015, the Commission produced a Consultation Paper outlining the issues, suggesting options for reform, and asking for public submissions.

Please email all submissions to: stalking@lawreform.vic.gov.au

Dr Vivian Waller was admitted to legal practice in 1995. She is the Director and Managing Partner of law firm Waller Legal. She has 25 years experience representing survivors of institutional child sexual abuse including litigation in the Supreme Court of Victoria and the High Court of Australia. Dr Waller was instrumental in the Royal Commission into the Institutional Responses to Child Sexual Abuse where she represented 20 survivor witnesses in case studies inquiring into the Melbourne Response, Victorian State Wards, Yeshiva Bondi and Melbourne, Catholic Church Authorities in Ballarat and the Criminal Justice System. She has written submissions for the Royal Commission and appeared before the Senate Committee in relation to the establishment of the National Redress Scheme. Dr Waller represented, on a pro bono basis, the complainant in the criminal prosecution and appeals process in relation to allegations against Cardinal George Pell. She holds a Doctorate in Law from the University of Melbourne, and a Bachelor of Laws and Bachelor of Arts (Honours) from Monash University. Dr Waller was appointed to the Victorian Law Reform Commission in November 2020.

Dan Nicholson is the Executive Director, Criminal Law at Victoria Legal Aid, responsible for the delivery of legally aided criminal law services across the state. Dan has worked with VLA since 2012 in a range of roles, including as the Executive Director, Civil Justice, Access and Equity. Dan previously managed the Human Rights Unit at the Victorian Department of Justice, was Associate to Justice Maxwell, President of the Court of Appeal and worked at Fitzroy Legal Service. He has worked on a range of human rights issues in Cambodia and Timor-Leste. Dan was appointed to the Victorian Law Reform Commission in September 2018, and as a Director of the Sentencing Advisory Council in 2021.

Emeritus Professor Bernadette McSherry holds an honorary position in the Melbourne Law School, having served as the Foundation Director of the Melbourne Social Equity Institute at the University of Melbourne from 2013 to mid-2021. She is an internationally recognised legal academic in the fields of criminal law and mental health law and is a Fellow of the Academy of Social Sciences in Australia as well as a Fellow of the Australian Academy of Law. She served as a Legal Member of the Victorian Mental Health Tribunal for 18 years until mid-2018 and is currently a Commissioner serving on the Royal Commission into Victoria’s Mental Health System. She was appointed to the Victorian Law Reform Commission in June 2018.

Until 2018, Mr Gardner was Senior Legal Advisor to the Victorian Director of Public Prosecutions, with 36 years’ experience in the Crown Solicitor’s Office and the Office of Public Prosecutions (OPP) as a prosecution solicitor. Mr Gardner held a range of policy-related positions with the OPP including Manager of Policy and Advice for 21 years, for 14 years of which he was also Manager of Appeals. Mr Gardner has served on numerous committees and working groups addressing criminal law reform issues. He was appointed as a Commissioner of the Victorian Law Reform Commission in April 2012 and in June of the same year was awarded an Australian Public Service Medal for outstanding public service to criminal law reform.  He was Acting Chair of the Victorian Law Reform Commission from March to August 2019.

Kathleen Foley SC is a barrister with a broad practice spanning public law, commercial law and common law. She also has a significant public interest litigation practice, representing clients in environmental, police tort and human rights cases. In addition to her work as a barrister, Kathleen is a writer and gender equality advocate. She was appointed to the Victorian Law Reform Commission in November 2020. Prior to commencing at the Victorian Bar, Kathleen worked as an attorney in New York and as a solicitor in the government sector in Western Australia.

The Hon. Jennifer Coate AO has held a number of judicial appointments over the last 27 years, including Magistrate, Deputy Chief Magistrate, the inaugural President of the Children’s Court of Victoria, Judge of the County Court of Victoria, the first female State Coroner of Victoria, and  in January 2013, Justice Coate was appointed a judge of the Family Court of Australia and thereafter released onto  the Royal Commission into Institutional Responses to Child Sexual Abuse, where she served as one of six Commissioners for the five years of that Royal Commission. Ms Coate has previously held positions as a part-time Victorian Law Reform Commissioner, a solicitor in private practice, a solicitor for the Legal Aid Commission of Victoria and a legal policy officer in the Attorney General’s office of the Victorian Government. In October 2014, she was appointed as a Fellow of Monash University. In January 2019, she was made an Officer of the Order of Australia. In April 2020, she was appointed as the Chair of the Victorian Victims of Crime Consultative Committee. She was appointed to the Victorian Law Reform Commission in June 2020.

Liana Buchanan is Victoria’s Principal Commissioner for Children and Young People. She was formerly the Executive Officer of the Federation of Community Legal Centres and was also responsible for the monitoring and review of the Victorian corrections system as Director, Office of Correctional Services Review from 2009-2013.  Ms Buchanan has worked as a community lawyer and in a range of law reform and legal policy roles, including at the Women’s Legal Service (SA), the Equal Opportunity Commission, the Victorian Law Reform Commission and as senior adviser to the Secretary, Department of Justice.  She was appointed to the Victorian Law Reform Commission in February 2015.

With a distinguished career spanning forty-five years, the Hon. Anthony North QC is a former judge of the Federal Court and the Supreme Court of the Australian Capital Territory. Admitted to the Victorian Bar in 1976, he was appointed Queen’s Counsel in 1989. In 1995, Mr North was made judge of the Federal Court of Australia, where he served until his retirement in 2018. He also served, from 2004, as additional judge of the Supreme Court of the ACT. During his time as judge, Mr North presided over cases involving constitutional and commercial law, industrial and employment law, taxation, intellectual property and native title. He holds a Bachelor of Arts and Bachelor of Laws with Honours from the University of Melbourne and a Master of Laws from the University of London.

Mr North took over from Bruce Gardner, who was appointed as Acting Chairperson of the Commission in March 2019 following the death of Philip Cummins.